You are here: Homepage / Our News / AKYUREK TECHNOLOGY KEEP TAKING ITS TECHNOLOGY TO FAR AWAY COUNTRIES TURKAN FOODS / AMERICA

Turkhan Foods was founded in California to improve quality assurance for consumers in 2007. Although itself a young company, the Turkhan family has a rich history in the agriculture business. From its humble beginnings in 1945 as a forty-acre pistachio orchard in Gaziantep, Turkey, the Turkhan family expanded their land holdings until they opened their own processing facility in 1983, establishing the Boyhan International Trade Company. Throughout Boyhan’s existence, the Turkhan family became the Middle East’s and the Mediterranean leading supplier of seeds, dried fruits, and nuts while remaining its own primary producer. Still headquartered in Gaziantep, Boyhan has expanded its offices all over the world. Turkhan Foods is Boyhan’s sister company that connects the East with the West. Turkhan Foods has processing facilities in Turkey, Ukraine and California that specialize in sorting, shelling, and packing.

With trade relations in over 30 countries across 5 continents, Turkhan Foods is dedicated to working with local growers and processors to meet consumer demand. Turkan Foods has been expanding their almond, walnut picking and weighing facility with Akyurek Technology quality. 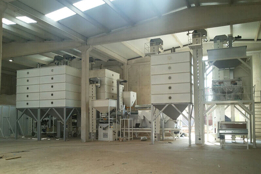